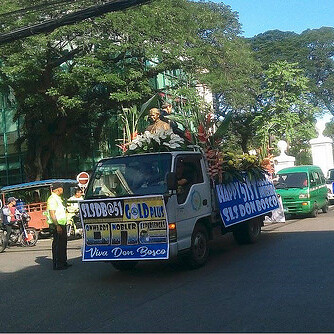 The aforementioned event kicked off with Parade and Panagkita (Alumni Homecoming) on the 27th followed by the Opening Liturgy with Wreath Laying and the PTA Family Day the day after. Triduum masses were also held before the feast day.

The get-together activity of the pre-school and primary school kick-started the second day of Triduum. The Inter-School Christian Dance Competition, with Junob National High School (JNHS) declared as the champion, and the Youth Night, with Ms. Katrin Arcala as the guest speaker, followed suit.

The “Sports in Dance” Mass Demonstration Competition and the “Don Bosco’s Dream at 9” Interpretative Dance Festival of the Elementary and High School respectively, which were the highlights of the celebration, commenced on the 30th. The Grade 2 of the primary level along with Grade 5 of the intermediate level from the Elementary Department and the Senior High School all reaped the championship title in their respective competitions.

A series of religious activities, such as the Procession and the Grand Holy Mass, occurred on the Feast Day (January 31). The aforesaid event adjourned with the SYM Games and the Lunch with the clergy, religious, government and DepEd officials.

This year’s Founder’s Week Celebration is aligned with this year’s Strenna, “Let us cultivate the art of listening and of accompaniment,” by Fr. Angel Fernandez Artime, SDB, and Rector Major

The main objective of the celebration is to commemorate the life and works of “The Father and Teacher of Youth” St. John Bosco and immortalize his living legacy to each and every Bosconian.