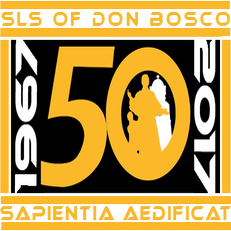 
The 50th Golden Anniversary of St. Louis School 0f Don Bosco was celebrated in grand style just this January 21 to February 4, 2017, with a series of activities that truly lived up to the theme golden Memories, Golden Moments and Golden Mission. The Founder’s Week festivities were kicked off with the Sikadagan – a biking and marathon race among Elementary and High School students with the cooperation of the faculty, staff, maintenance workers and school personnel held on Saturday, January 21, 2017.

This was followed by the phenomenal Musicale “Lolo Diaries” which highlighted Golden Memories as it depicted the life and times of a Louisian Pioneer and his Bosconian grandchildren. The next day, Sunday, January 22 was dedicated to celebrating Golden Moments as everyone, including all students and their families gathered for a Holy Mass and the traditional Family Day filled with scrumptious feasts, fun and games.

The next Saturday January 28 marked the 1st day of Triduum which kicked off with the Opening Liturgy for Founder’s Day Celebration followed by another set of Golden Moments as the Elementary pupils treated the audience with fantastic dances in the Modern Dance Mass Demo competition.

In the afternoon, the whole city witnessed Golden Memories as one of the longest parades was held in history, as St. Louis School and SLS-Don Bosco alumni batches from 1971 up to 2016 joined in the School Parade in grand style. After the Holy Mass, the Louisian and Bosconian alumni met again in the #Panagkita 2017, so far the grandest and biggest General Alumni Homecoming with alumni and past pupils from 1971 up to 2016 who reunited and celebrated their Alma Mater’s Golden Anniversary with explosive merriment, truly living up to the theme Golden Memories, Golden Moments and Golden Mission as they expressed their love and commitment for the school’s projects and plans.

January 29 Sunday marked the 2nd day of Triduum , starting with the Holy Mass in the morning and the general rehearsal for that afternoon’s much-awaited High School Asian Festivals Mass Demo Competition. Everyone enjoyed golden moments as the high school participants lived up to the expectations for a truly memorable cultural event, with the Grade 9 students presenting Japan winning first prize.

January 30, the 3rd day of Triduum was a day for another awaited event – the 3rd Inter-School Catholic Faith Quiz Bowl. This one-of-a-kind religious activity has been created by St. Louis School of Don Bosco to enhance knowledge of Catholic teachings and traditions among students, teachers, staff and all Catholics witnessing the event. The team of Holy Cross High School once more garnered first prize.

After the SYM games following the Quiz Bowl, everyone gathered once more for the afternoon Holy Mass in the Gym followed by the Religious Procession at 6:00 p.m. to pay homage to the Founding Father and Patron Saint of Youth, St. John Bosco. This golden activity ended with a literal bang as Fireworks lighted up the school grounds.

January 31, 2017 Tuesday was Don Bosco’s Feast Day and rightly kicked off with a Grand Holy Mass and the traditional Flower offering and Wreath laying to honor the Founding Father. A Golden Fiesta dinner was then served at noon to fully celebrate the occasion with distinguished guests, clergy, DepEd and other dignitaries.

In the afternoon, another unique socio-religious event created by St. Louis School of Don Bosco was held – the 5th Inter-School Christian Dance Competition. The dynamic participation of contestants from public and Catholic high schools in Dumaguete City made this one of the school’s golden moments, helping to cement its golden mission as a bastion of Catholic education in the Negros Island Region.

The week-long festivities ended on a grand note as all high school students gathered in the gym for the Youth Night – a night of dynamic spiritual and social lessons punctuated with songs of praise and worship – to cement the school’s Golden Mission in the heart of every Bosconian.

Finally, on February 4, 2017, Saturday the Inter-orphanages Get-together was held in the gym. The event was attended by orphans from 4 orphanages in Metro Dumaguete. They were entertained and fed by the student leaders of SAO, SG and PG and the SLS-DB marching Band. Again, this was a significant part of the school’s Golden Mission – to reach out and spread her advocacy and mission for the young, especially those in need.